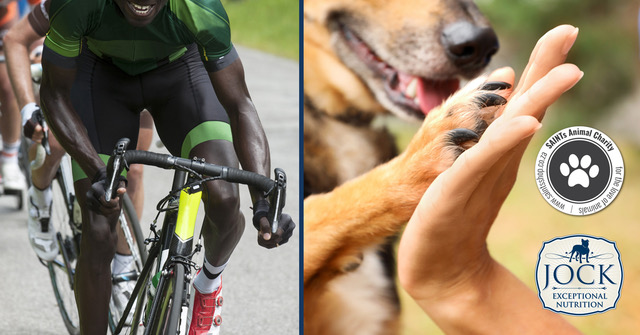 Ride For A Reason

People tend to have many different reasons motivating them to participate in fitness events. By taking part in this year’s 947 Ride Joburg cycling event – Ride for a Purpose – you’ll have something to believe in as you’ll be racing for a cause. Forgetting about your own personal fitness goals for a while could lead to a rewarding experience on every level.

JOCK Dog Food is dedicated to lending a helping paw to make fundraising possible for SAINTs Animal Charity, a fully audited non-profit organization that operates on a platform of transparency for ethical welfare of animals.

SAINTs Animal Charity has been raising funds and helping improve the lives of stray and shelter animals since 2012. This year, SAINTs will be venturing into the world of cycling by raising funds on two wheels at the annual Discovery 947 Ride Joburg event, with 11 animal beneficiaries falling under one umbrella, and forming one supergroup in the process to which animal lovers can contribute.

Since their inception, SAINTs has paid out over R 14 000 000.00 to various animal welfare organisations. Their primary mission is to raise funds for their authorized beneficiaries, but they have also jumped in and provided financial aid to animal welfare organisations and projects on a national scale when disaster struck. SAINTs also partners with organisations that need financial assistance on ad-hoc basis by organising fundraising events such as movie nights or rock nights, or reselling donated goods. One of the initiatives that SAINTs Animal Charity holds dear is their sterilisation fund; this fund assists in controlling the population of cats and dogs which is much needed within a South African context, as well as mitigating the effect of overall health problems that unsterilised animals are susceptible to.

Are you ready to get involved? Simply put, showing up for an inspirational organisation such as SAINTs will fuel your motivation – your effort will change lives. So sign up today to ride in support of SAINTs or their beneficiaries.

It’s as easy as following these steps:

JOCK Dog Food is scientifically formulated to unleash your dog’s inner legend because heroes aren’t born – they’re made. As we only use quality ingredients, our veterinary-formulated dog food is not only delicious, but also rich in protein and loaded with essential minerals and vitamins to address your dog’s day-to-day nutritional needs. This is key to protecting their health and making sure that your furry friend enjoys all of life’s adventures at their physical and mental best.

The JOCK team believes every dog should enjoy a life like the canine legends of yesterday – filled with fun and adventure.

Join us in making a difference to animals in need!

Ask The Expert: I just howled to say I love you

Returning The Gift of Life
Scroll to top